Question: Is now the time to consider investing in [Energy and Agriculture]?

Answer: A common consensus seems to be building that the energy and agriculture sectors should remain strong industries for the foreseeable future, as the underlying dynamics of the Ukraine situation expect to persist regardless of whether both countries could come to a satisfactory solution soon (which is of course, unlikely). By now, most people are at least somewhat familiar with the significant natural resources each country possesses and how much they contribute to the ability of other countries- especially in Europe- to power their homes, vehicles and humans with imported petroleum, natural gas and fertilizer.

However, caution is warranted. Like in all other sectors of the economy, risk still exists in both of those two industries. One primary factor I observe is that Wall Street often cares greatly about earnings and if supply is low (even if demand is high), stock prices sometimes confound investors who see scarcity and price inflation and immediately and automatically equate it to opportunity. That's not to say there is never opportunity, only that other factors often carry an influence that many investors ignore or miss entirely. If you didn’t think earnings matter, just take a look at Netflix’s stock price this week!

Ford is a perfect example. People are literally obsessed with the new Bronco SUV line and there are almost 200,000 people who have put down cash deposits to be on the waiting list- one that could stretch over a year now. The line has gotten so long that Ford has actually stopped taking deposits, more worried about the anger generated by an unusually long wait than the opportunity from unlimited demand.

In addition, Ford's new Lightening EV truck could be a truly revolutionary innovation that is likely to beat the Cybertruck to market. Yet, Ford’s stock is down almost 30% in 2022, how can that be? 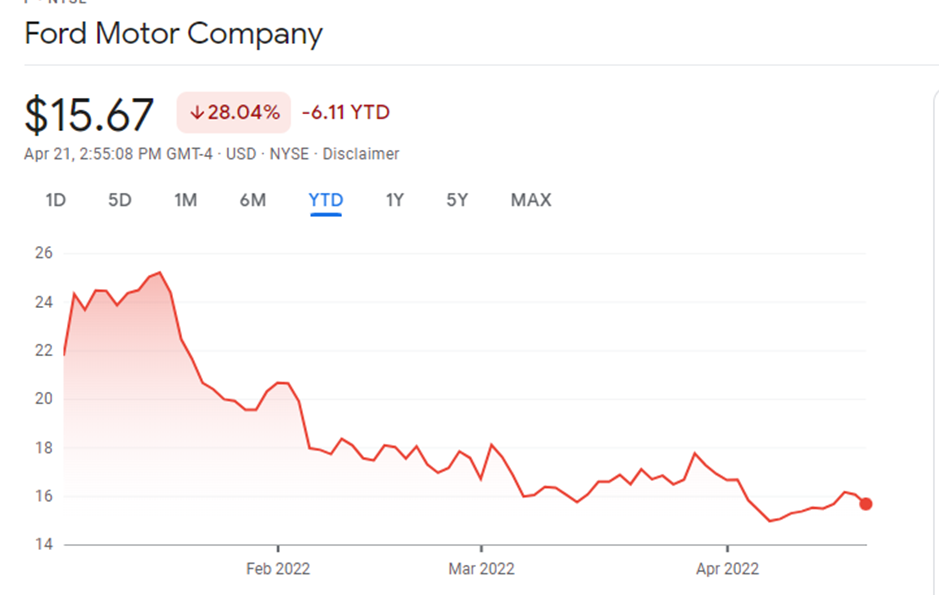 The reason is that if Ford can’t move all of those trucks with missing chipsets off their lot to channel stuff them down their dealer's throats, then their revenues drop and the vehicles begin to depreciate (even faster than they already were!)

The point being that it’s useful in these times of energy and food inflation - and the inclination to see opportunity- to step back and honestly evaluate the entire landscape in which a company exists. It’s no longer enough for a company to simply have a great product, one has to also consider its position in this time period, in its given industry and within the entire just-in-time supply chain system, one that is strained- yes by the Ukraine conflict- but more so by the global government’s response to the pandemic, specifically China. If China continues it's aggressive tactics to monitor and contain a current variant outbreak (one which many believe is being done purposely to inflict pain on it's trading partners, namely the United States, then there's no guarantee that we will see stocks fully reshelved and dealerships fully replenished in 2022. For those with ultra-short term objectives or investing for only the next couple of years, that could be considered problematic. For all other investors (which represent 99.9% our clientele), it could be considered irrelevant to portfolios with time horizons stretching beyond the next election or season of the Bachelorette.

In this environment, many investors are beginning to consider value stocks- think Berkshire Hathaway (Warren Buffett's company), Chase, Johnson & Johnson, Coca Cola and Proctor & Gamble- may feel like the modern version of a savings account. Crazy, right? Here me out...

Value stocks, as measured by Morningstar, made over 25% in 2021, including 16.32% in the first 90 days. That was impressive, except in comparison to the Growth sector. Value had been a bit of a laggard almost since the end of the Great Financial Crisis (GFC). As of the time of this post, the Value fund IWD was down about -1.13%, compared to it's growth counterpart's losses of -15.47%. 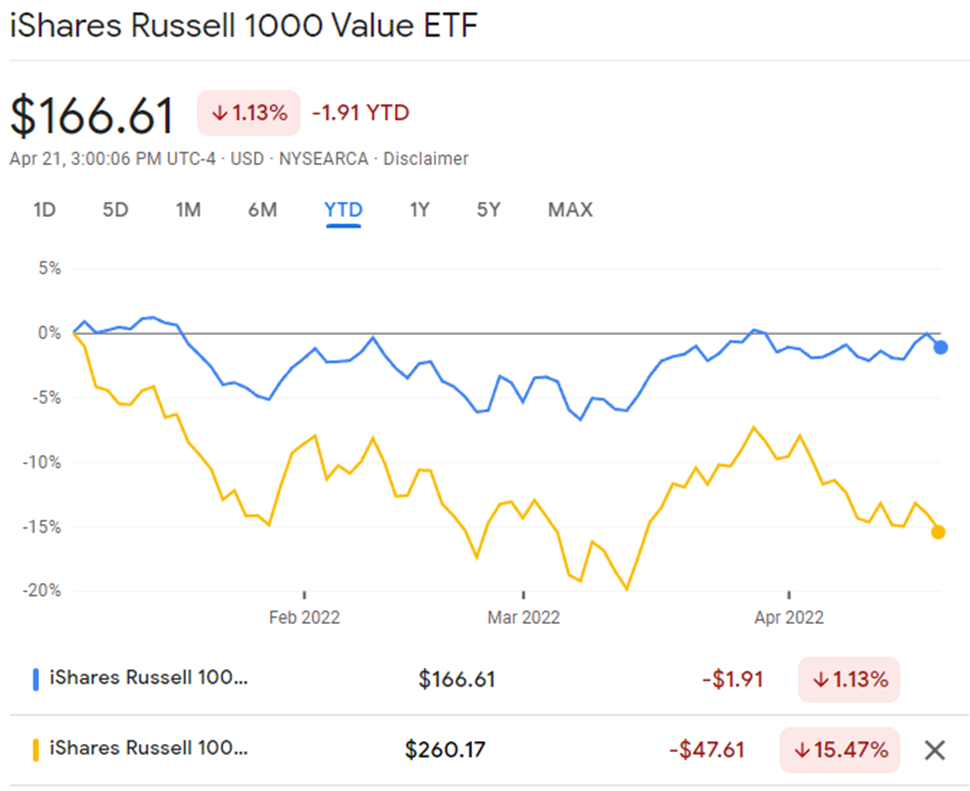 IWD also pays a dividend of 1.69%, which (still) beats the bank, probably the rest of most investor's 2022 portfolios and a stick in the eye.

What's my point? Well, Ford pays a dividend of 2.55% and 2.65%. I cannot guarantee, but I would be willing to bet that both companies will be here in 1/3/5/10 years from now. The only difference (of many!) between using them as a savings account and your bank is fear. And some irrational beliefs about the FDIC, but that's a conversation for another day.

If you believe- as many economists do- that 2022 could be a pretty mediocre to flat in terms of capital appreciation (=growth), then dividends/interest may be the "gains" and conservative/defensive holdings the “new cash” of 2022. (Since "cash is trash" in a hyper-inflationary environment and bonds are currently down more than stocks in 2022- the first time that has happened in a generation.)

So now investors are left with a Goldilocks scenario…. Investors are naturally tempted to flee to cash, that's the easy route (and maybe the correct one depending on the investor and situation. But most cannot sit too conservatively in cash/bonds without the risk of getting crushed by inflation. I know that, you know that, everyone understands that at a rational level. Our government economists at the BLS claim inflation is an uncomfortable (and bananas) ~8-9%, but they are compromised, sometimes they lie and obfuscate and anyone living in reality knows life feels at least 15% more expensive than a year ago. But the lofty valuations in growth instruments have already begun to adjust and could represent a substantial risk if our economy experiences any additional shocks to the system. And even if we don’t, the rising interest environment could act as a massive headwind for growth stocks (think tech and health care).

As a result, we are adjusting portfolios to accommodate such an environment, which some people call TINA (“There is No Alternative” to stocks). For many clients and models, we are continuing the strategy we put in place in fall 2021:

For some, this may not be the investment portfolio they want, but perhaps it’s the one they need for now. In a TINA world with rising inflation and interest rates, we believe it will be prudent to emphasize United States - based companies and specifically the value sector- almost as a default in the absence of certainty for our 2022 outlook. We plan to maintain this strategy until we see something that suggests a pivot in the geopolitics, economics or the markets. It’s defensive, but until someone shows us the economics behind being more aggressive right now, this seems our best bet for many clients through Q2-3 2022.

We're okay with defensive, which does not mean fearful or freaked out. It just means financial markets are cyclical like all seasons in life, and it can’t be sunshine everyday. And who would want that anyway. We encourage clients to think of market slowdowns, dips and corrections as normal and predictable components of a healthy, dynamic and (quasi-) capitalistic economy. Like the weather, markets (should) go through seasons, and yet when they arrive, it's amazing to me how many clients act like it's the first time they've experienced it, offended it visited them or angry that they have to adapt and be patient. So many investors lose sight of the fact that if the market only went up, and was always easy to profit from, everyone would do it, even stupid people.

I personally enjoy Texas winters. I get to pull out my excess quantity of winter clothes for two whole weeks. I don't sweat in my sleep. And I can drink hot chocolate with (slightly) less shame. I always know it's going to be short, very mild in comparison to anywhere north of us and provide all kinds of value then and later in the year. The colder temperatures refresh the soil, replace the leaves on the trees and kill bugs, especially my arch nemesis, the dreaded mosquito. Who loves my blood like a fat kid loves cake.

PAs we traverse through this long-overdue winter, I encourage all clients to think long-term. Which is the opposite of what literally every other business in the culture wants you to do. The media wants us to come back after the commercial break. Amazon wants us addicted to two-day shipping. The car manufacturers used to be able to ship that vehicle you wanted in the color you wanted from across the state to your door by the weekend weekend. Netflix offers up that show we want in 30 seconds. And I don't have to wait four hours to hear my favorite song (I'm old enough to remember when that was a thing.) We now live in a world where we can literally just think of those things above and legitimately have them in front of us in a moment, and yet so few contemplate how that has changed our feelings on gratitude, entitlement or patience. Or market volatility, which also used to be a thing.

Please keep in mind that plenty of smart economists (and me) predict that Q1 2023 may be the soonest we’ll see this supply chain back on line with some degree of stability. I predicted in these posts a year ago that this "season" (Q1 2022) would be the point when the average person would not only feel inflation but struggle with it. And sure enough, here we are. Also remember that Wall Street usually moves about 6-9 months ahead of the economy. The two reasons I suspect are 1.) testosterone and 2.) it's not their money they're playing with. They can be more speculative with it, they aren't as emotionally invested in it as you are and they can make bets that don't have to pay off right away. They don't need that pscyhological validation that haunts so many of my clients. And the culture.

As such, if you think it’s possible that markets will strengthen within the next year - or 2/3/4/5 years!- then perhaps now is a great time to turn off the news, go outside, stay committed to your long-term goals, pace yourself when viewing your account balance, let the capitalistic economy do it's thing and just ride this sucker out. The past is not predictive of the future* and there is never a a guarantee that a.) I know what I'm talking about or b.) your portfolio will be worth more in the next quarter/year/decade, but there is some precedent to this phenomenon.

Call it a hunch.